As you all know that Remote Code Execution vulnerability has been identified in Bourne Again Shell as known as BASH which is command line shell in Linux and Unix. This vulnerability affects version 1.14.0 to 4.3, also known as Bash Bug or Shellshock.

So far many websites have released the news about this vulnerability, however I though to post on our blog for all our readers. According to CVE this vulnerability allows remote attackers to execute arbitrary code via a crafted environment.

Below I have tried to explain that how Bash Bug vulnerability works. Bash allows user to type commands and then execute them in the terminal in Linux and Unix based systems.

Below is the little bit variation as compared to our first example.

The "env" command in above example sets environment variable NAME=Girishkumar and it executes the command based on the environment.

Like other programming languages Bash has functions but limited implementation, hence it is possible to put Bash functions into environment variables. Let us use the function with env command.

Below is the example.

In above example we have used function with "env" command and then we have executed it and got the output. Here  -c option executes the commands from a string ie. everything inside the quotes.

So how Bash bug or Shellshock works ?

When we add the extra code to the end of the function definitions the flaw is triggered.  Below image gives good understanding of Bash Bug. 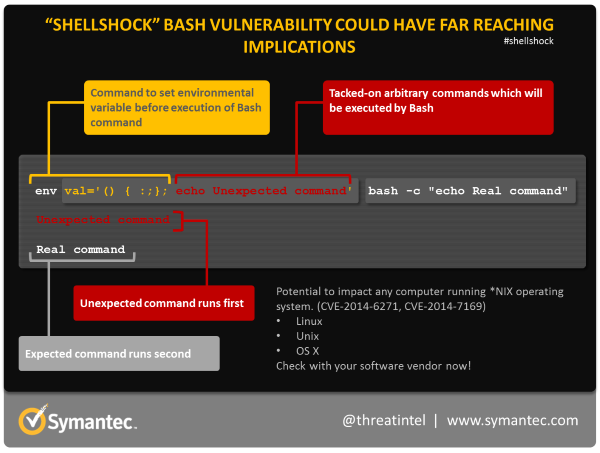 Below is the vulnerable code example.

Here malicious input in XY='() { :;}; echo vulnerable' is the reason of this vulnerability. Here the environment variables treats it as a command and executes it rather than treating it as a string of letters and and ignoring it.

How to test whether your system is vulnerable to Bash Bug / Shellshock or not ???

Run below command in Bash terminal

If you are vulnerable the it will give the world "vulnerable" in the output as shown below.

If you are not vulnerable the it will give the output as below. It will echo only "test" but not "vulnerable".

So better to update your bash version as soon as possible as the different vendors have released the patch for this vulnerability..